Demand for Alternative Dairy Is Here to Stay, as Consumers Seek Balance Between Sustainability, Health and Taste

When Elmhurst Dairy was founded nearly a century ago, the family-run company sold dairy products produced from local New York cows. In 2016, it shuttered, re-emerging the following year as Elmhurst 1925, a plant-based milk brand that entirely removed animals from its equation.

“We had a very rich history in the dairy industry, but as people’s needs in their diets shifted, and they wanted to shift to products that were better for their bodies, or the environment or animal welfare, it quickly became apparent that we were moving into a plant-based revolution,” said Heba Mahmoud, the brand’s senior director of brand marketing.

The move is indicative of the times, with non-dairy milk moving beyond its status as a yuppie-era trend and now sitting as a suitable substitute on the shelves of major U.S. grocery and coffee chains. 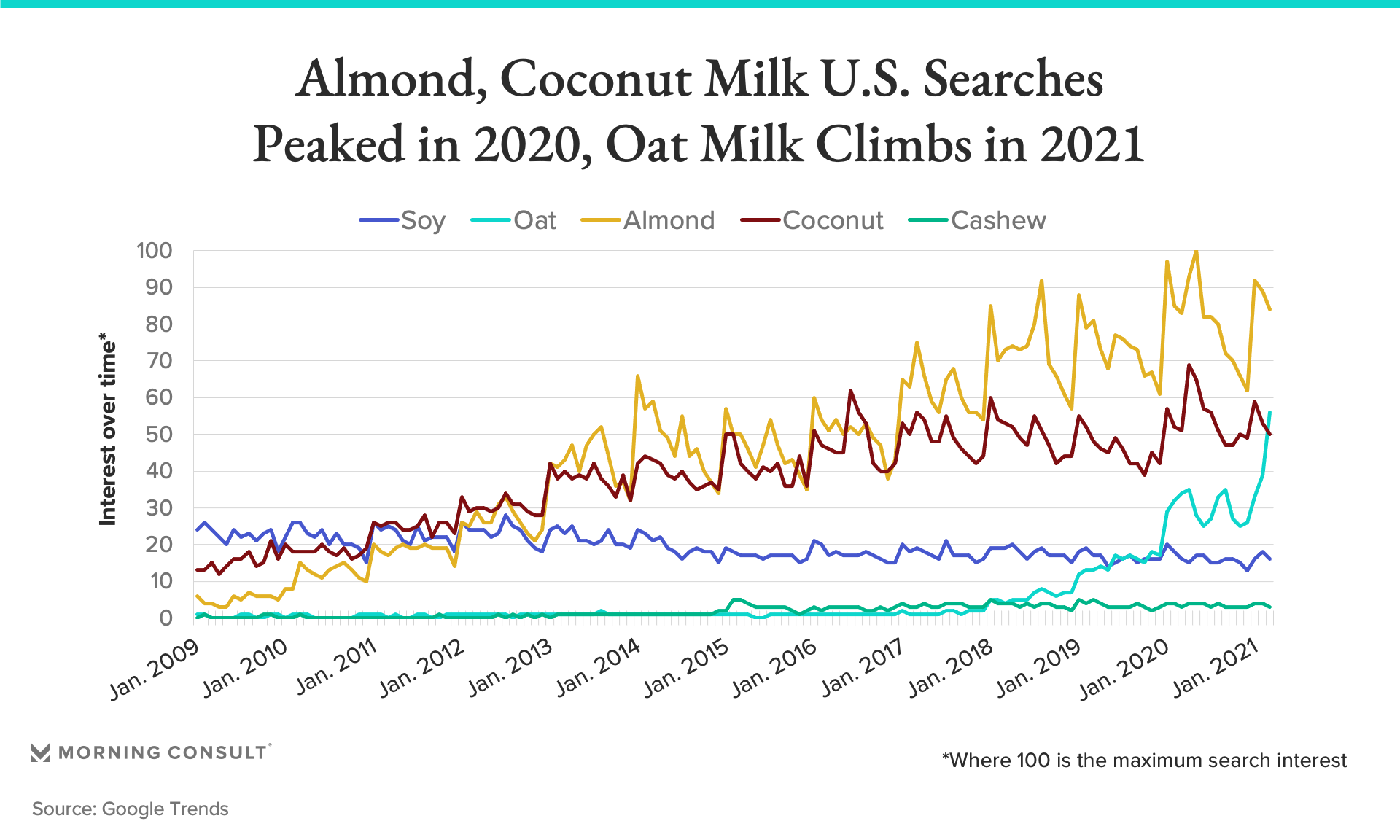 Now, roughly a decade into non-dairy beverages’ slow and steady ascent in the U.S. marketplace, products such as soy milk and oat milk are nearly as common in American households as some kinds of traditional cow’s milk, new polling shows.

Cow’s milk still takes up more room in the public’s fridges — 2 percent and whole milk in particular — but non-dairy milk is just as common as 1 percent and skim milk, according to a Morning Consult survey conducted March 18-22 among 2,200 U.S. adults.

Roughly 1 in 3 consumers (32 percent) use non-dairy milks at least once a week, with almond milk standing out as a favorite, according to a March 12-15 Morning Consult survey.

Non-dairy milks are proving more popular than other alternative foods, with two-thirds of the public saying they’ve tasted a non-dairy milk, compared to 52 percent who say they’ve tried a plant-based protein and 41 percent who have tried tofu.

Major coffee chains could be contributing to this adoption, making alternative milks mainstream among consumers who choose to substitute them in drink orders, although often for a slightly higher price, said Keri Szejda, founder and principal research scientist at North Mountain Consulting Group LLC, which works in the emerging food tech and alternative protein space to advise clients on consumer research.

Companies that produce non-dairy beverages are anticipating that demand will continue to rise, based on their earnings figures over the last few years. 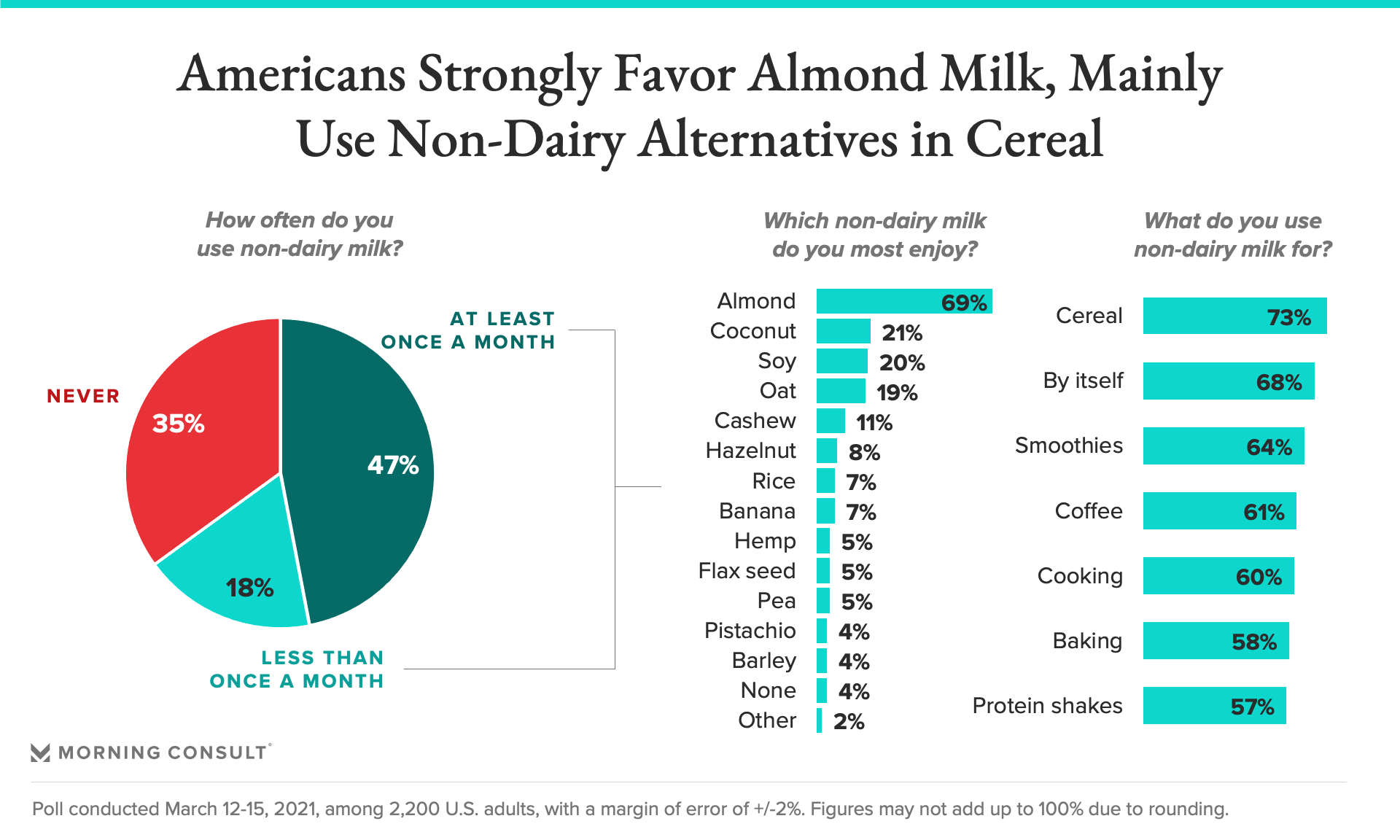 Scott Lee, vice president of marketing at Ripple Foods, which entered the market in 2015 using pea protein to create non-dairy products such as milk and ice cream, said he’s seen interest in the category grow over the past six years, with category growth up more than 20 percent year over year in 2020.

And Danone North America, which counts non-dairy brands Silk and So Delicious as part of its portfolio, saw its plant-based segment increase in the “high teens” on a like-for-like basis for the fourth consecutive quarter, said Andrew Hartshorn, senior vice president of plant-based food and beverages.

Danone has seen rising interest in flexitarian diets, he said, or diets that are primarily plant-based but allow for the occasional cheeseburger.

“We see many consumers building their diet to include meat and plant-based alternative options,” Hartshorn said. “The flexitarian lifestyle is becoming more and more mainstream.”

But roughly half (49 percent) of Americans keep only one type of milk on hand, according to the March 12-15 Morning Consult survey, suggesting that competition in the dairy and alternative dairy space is intense, especially considering the long-standing legacies of some classic dairy producers such as Organic Valley and Danone’s Horizon Organic, and the ever-growing number of alternative brands.

Leaders at several of these companies agree that heightened competition is good for overall industry growth, with increasing alternative options drawing in more consumers who have never been big milk drinkers. 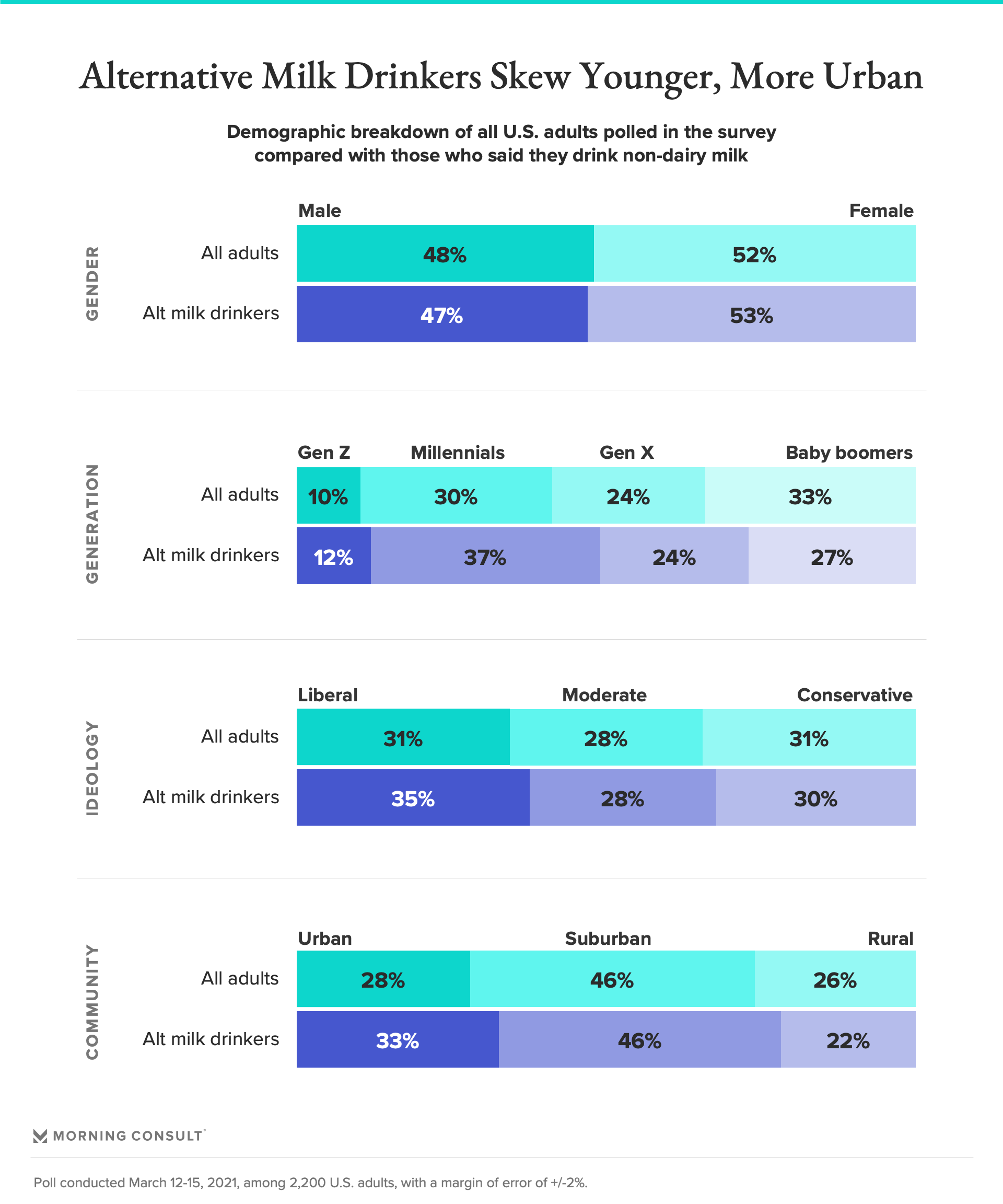 Pushing back on the stereotype that the alternative milk market is largely driven by women and progressive elites, demographic data shows that men are just as likely to have tried alternative milks as women, and that alt-milk drinkers don’t skew heavily toward those with liberal political ideologies.

Alternative milk drinkers do tend to be younger — millennials and Gen Zers prefer non-dairy options more than the general population — and are more likely to live in urban areas than rural ones, according to polling. At Dunkin’, non-dairy options are most popular on the West Coast, Gregory said, although by only a small margin.

Still, interest continues to move inland from the urban coasts. Szejda said that, based on focus groups she’s conducted, people across regions have heard of and tried dairy alternatives, even if those in rural areas are not yet purchasing them as often as urban dwellers.

Most alt-milk drinkers (82 percent) choose to skip dairy because they prefer the taste of non-dairy milk, according to the March 12-15 Morning Consult poll.

The popularity of alternative milks has also expanded the dairy space to include consumers with dietary restrictions such as lactose intolerance, with health concerns also among the top motivators for people who reach for non-dairy milks. A similar share said they drink non-dairy milk because they think it is better for the environment.

That assumption generally holds true, according to Isaac Emery, founder and principal consultant at Informed Sustainability Consulting LLC, which works with large nonprofits and small businesses in the food space to help them understand and communicate environmental and sustainability concepts.

Sustainability in the dairy industry is a nuanced topic, with environmental impacts changing even between different plant and nut bases.

Dairy giants such as Organic Valley are exploring how to address the ways using cattle impacts the environment, including the fact that they release methane, via methods such as feeding cows specialized diets to reduce those emissions, and using renewable energy sources at its facilities to scale down its carbon footprint.

For other companies and consumers, sustainability is even more important in branding than an “all-natural” label, so much so that some believe the future of the space could lie increasingly within a lab.

Take Perfect Day Inc., for instance, which considers itself part of an emerging category of food companies that rely on cellular agriculture to create their products.

Perfect Day uses a process called precision fermentation to create a protein powder used for dairy production — essentially giving the digital sequence of DNA that’s responsible for making milk in cows to a microflora to copy — and provides it to direct-to-consumer ice cream companies to create co-branded products that are animal-free, but not dairy-free, said Nicki Briggs, Perfect Day’s vice president of corporate communications.

The powder can be used by traditional and alternative dairy companies alike for more sustainable production, as it eliminates the need for animals — and their inherent environmental impacts — just as plant and nut bases do.

The fact that it’s lab-made might be a barrier for some, but Briggs said Perfect Day consumers are happy to marry a few of their most important considerations when shopping for dairy: taste, texture (matching dairy’s creaminess) and sustainability.

“We’re constantly hearing from consumers that they want brands to do better when it comes to things like sustainability, but taste is really key for them, and they’re not willing to sacrifice that,” Briggs said. “Instead of competing with major food and dairy companies, we can work with them to achieve this.”

Coordinated Federal Effort On Diets Could Save Lives, Money