Those looking to get healthy ahead of the festive season may find themselves racking up an hefty grocery bill as diet foods are often more expensive than their standard counterparts.

But one fitness expert has shown how it may be best to keep your wallet healthy, as  it’s not always best healthier to opt for diet food alternatives as often they have higher calories than their full-fat counterparts.

Graeme Tomlinson, 32, from Aberdeen, who is known online as The Fitness Chef, took to social media to share how foods are often not as healthy as they seem.

In another example, he shows how an Innocent smoothie has more calories than a bottle of Coke, and almost as much sugar, while Weight Watchers chocolate biscuits are only nine calories less than McVities, and their ready meals are higher in calories. 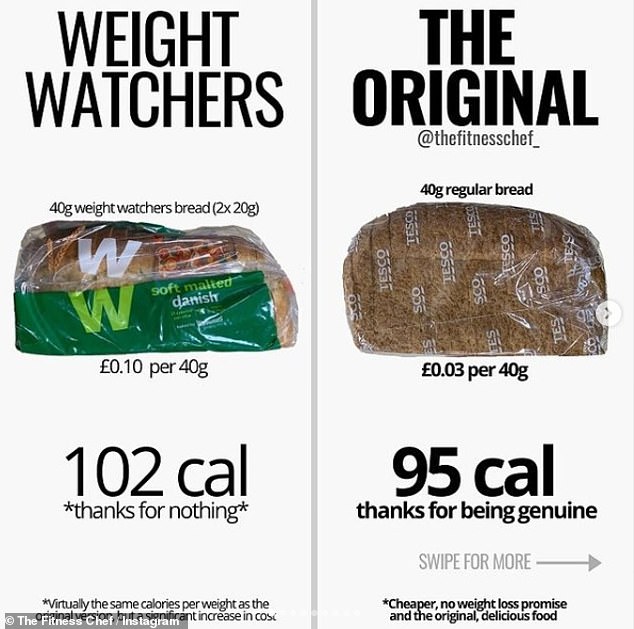 Graeme Tomlinson, 32, from Aberdeen, who is known online as The Fitness Chef, took to social media to share how foods are often not as healthy as they seem. In one example he highlights Weight Watchers bread, which is 102 calories per 40g, compared to regular Tesco bread which is 95 calories per 40g, and a third of the price. 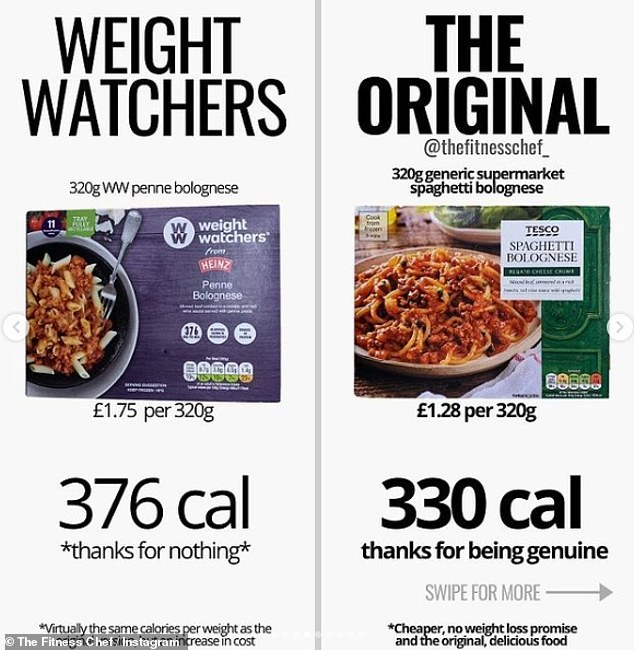 In one infographic, he uses the example of a Weight Watcher Penne Bologenese ready meal, and compares this to Tesco’s Spaghetti Bolognese. 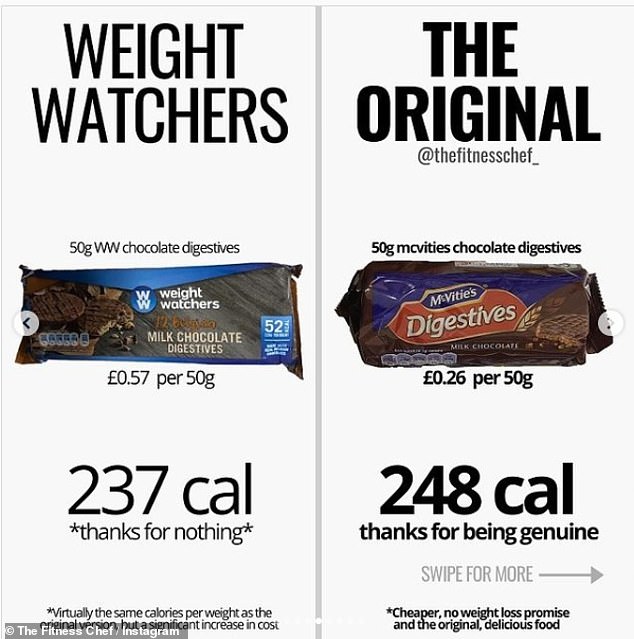 Weight Watchers chocolate digestives have 237 calories per 50g, while the famous McVities biscuit only has 11 more calories but is almost half the price

Hoping to bust popular myths, health coach Graeme has gained nearly 800,000 followers by shining the light on how many hidden calories popular dieting products contain compared to their counterparts, in an array of eye-opening infographics.

However he does admit that the healthier swaps can contain more nutrients, fibre and less fat, and advises those wishing to lose weight to watch their quantity instead of counting the calories.

‘Though some may owe their success to Weight Watchers, for others it’s needless concept – conjured from the physiological simplicity that is a calorie deficit – means that fat loss progress is not possible,’ he explains on Instagram.

‘The system is designed in a way whereby one requires dedication to Weight Watchers to lose fat. Yet such dedication is void from any aspect of self empowerment or meaningful education,’ 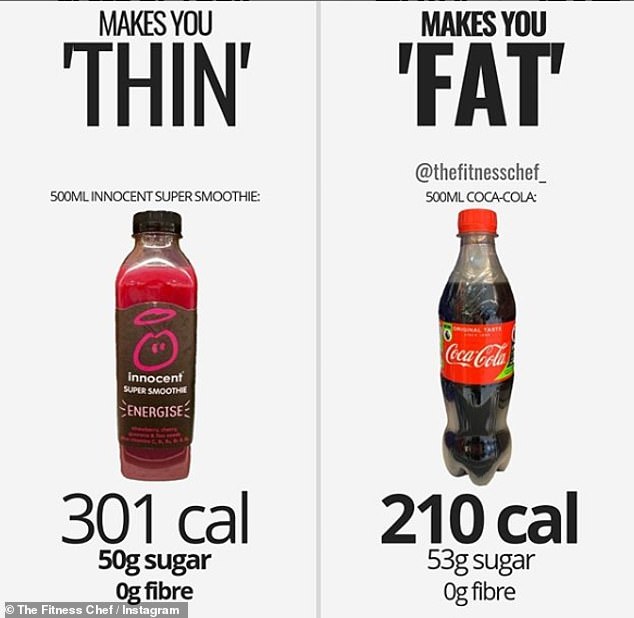 He’s also often compared fruit smoothies to sugary fizzy drinks, saying people are misinformed when they say naturally occurring sugars are ‘better’ than refined. Tomlinson acknowledges that healthy foods can come with additional nutrients that have health benefits, which junk food will not contain. However he says that if weight loss is your goal, then it doesn’t matter where your calories come from, you will still gain weight if you eat too many of them

‘Though based somewhat on a calorie deficit, in the case of their “weight conscious” range of meals and snacks, one may anticipate that they would create similar versions of calorie dense snacks and reduce caloric density – thus enhancing ones ability to reduce body fat whilst enjoying similar portion sizes of enjoyed foods,’

‘But alas, they have not. They have created products which not only copy the concept of the original treat, but that are virtually identical in calories per gram. They are also more expensive,’ he adds.

In one infographic, he uses the example of a Weight Watcher Penne Bologenese ready meal, and compares this to Tesco’s Spaghetti Bolognese. 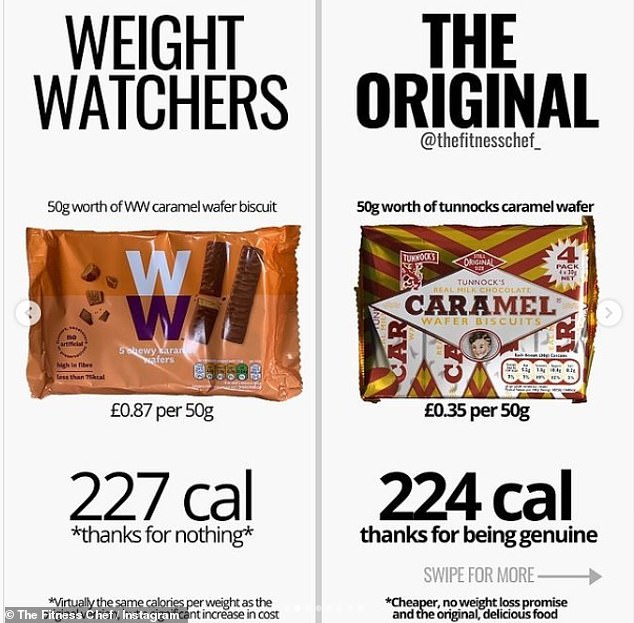 For 320g, the Weight Watchers version in 376 calories, while the ‘standard’ is 46 calories less and cheaper.

‘The “low calorie” claim is undoubtedly because WW’s suggested serving size would be hard pushed to feed an adolescent ant,’ Graeme writes on Instagram.

‘In fact, just like the annihilation of science that is the weight watchers “points” and “zero points” systems, the existence of these items promotes a demonic notion that the original versions are not worthy for fat loss. But as with any food, they are. If enjoyed.⁣ 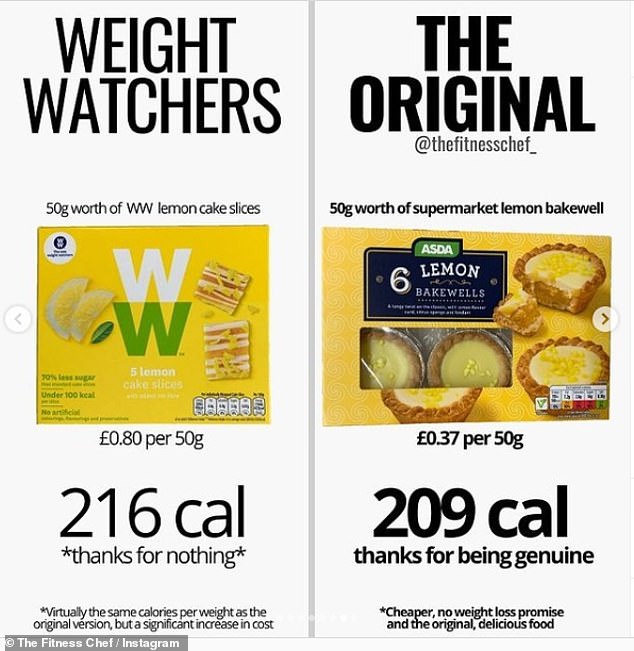 Weight Watchers lemon slices (left) are 216 calories per 50g, while the original version from Asda is 209 calories 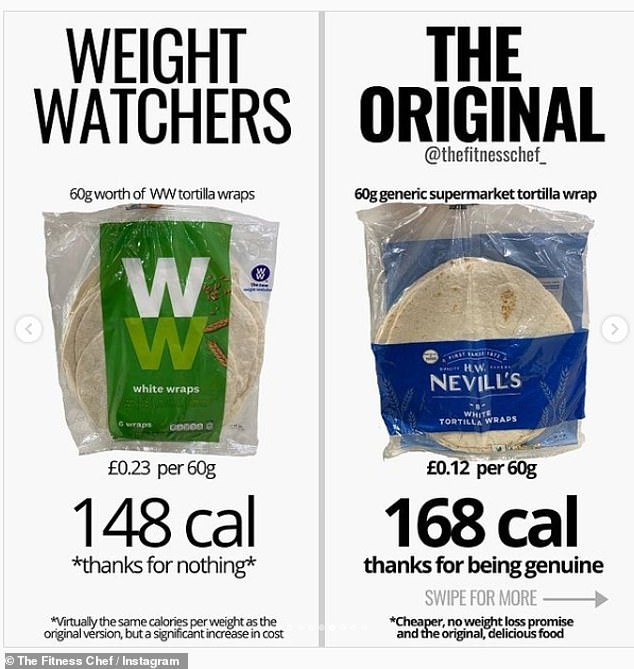 ‘Weight watchers is perhaps a fitting title. Because they collect vast sums of money whilst “watching” an individual’s weight (by virtue of scale measurements and complicated algebra). But in terms of empowering an individual with the basic educational tools to change their lives, they fall short. ⁣⁣

‘These versions of adored foods are an attempt to capitalise on uneducated people trying to make supportive food choices. Yet the additional expense delivers no new fat loss benefit.⁣⁣

⁣’Thus, for similar caloric value and less cost, consumers are better off enjoying the original, genuine, agenda free snack which doesn’t molest their wallet for no fair minded reason. 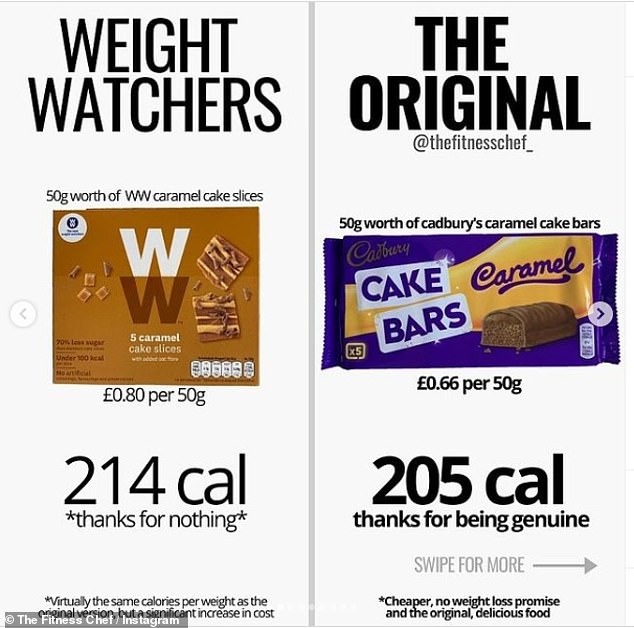 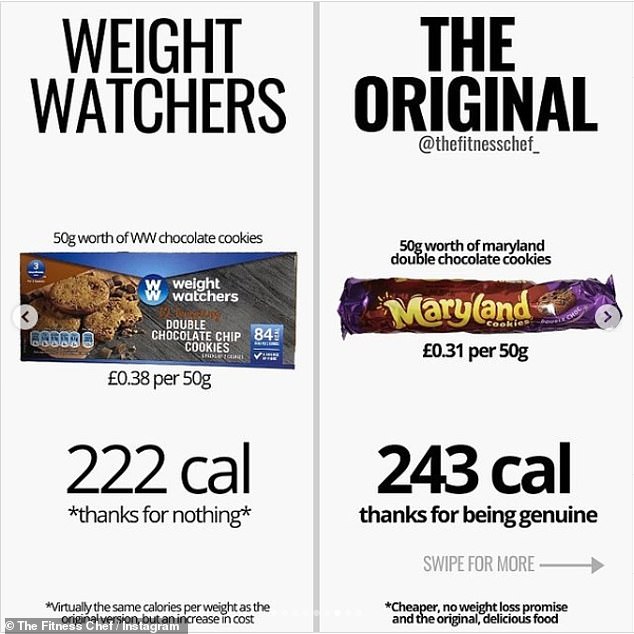 Graeme’s graphics reveal how some seemingly healthy alternatives may actually be stopping some people from burning fat and losing weight as they contain more calories than you might think.

For example, Weight Watchers chocolate digestives have 237 calories per 50g, while the famous McVities biscuit only has 11 more calories but is almost half the price.

Graeme also warned of Cadbury’s 30 percent less sugar Dairy Milk, which only has 15 calories less than the original – but does admit that it contains more fibre which is likely to fill the individual up faster. 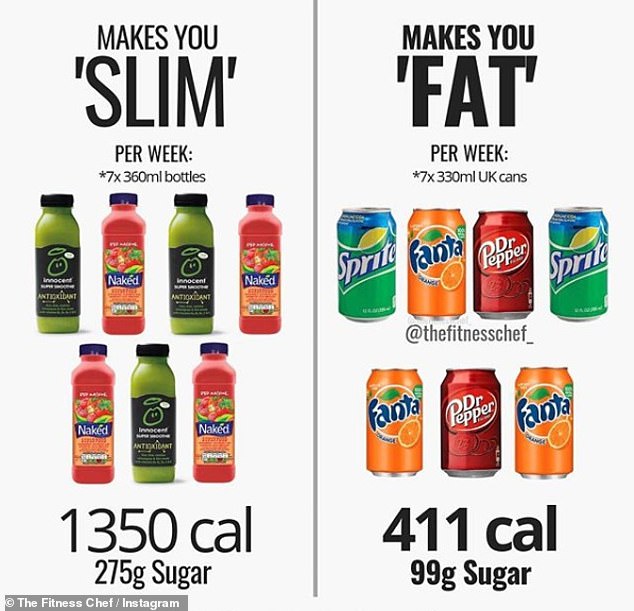 ‘One argument usually presented in favour of fruit and vegetable smoothies over fizzy drinks is inclusion of fibre. And given that these ingredients comprise of puréed fruit, one would assume that there would be moderate to significant amounts of fibre included, yet there is not’ Graeme explained on Instagram 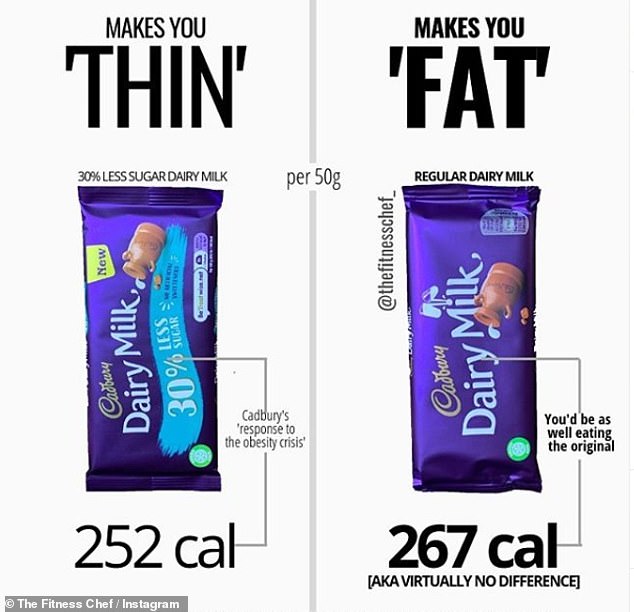 Graeme has also warned of Cadbury’s 30 per cent less sugar Dairy Milk, which only has 15 calories less than the original. Taking to Instagram, the fitness expert wrote: ‘The intentions of Cadbury’s ‘response to the obesity crisis’ are commendable to an extent. But in this case, it’s not the thought that counts. 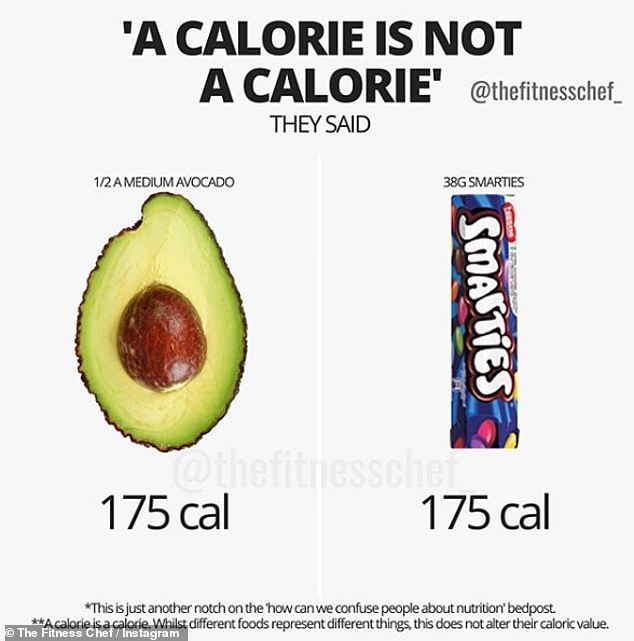 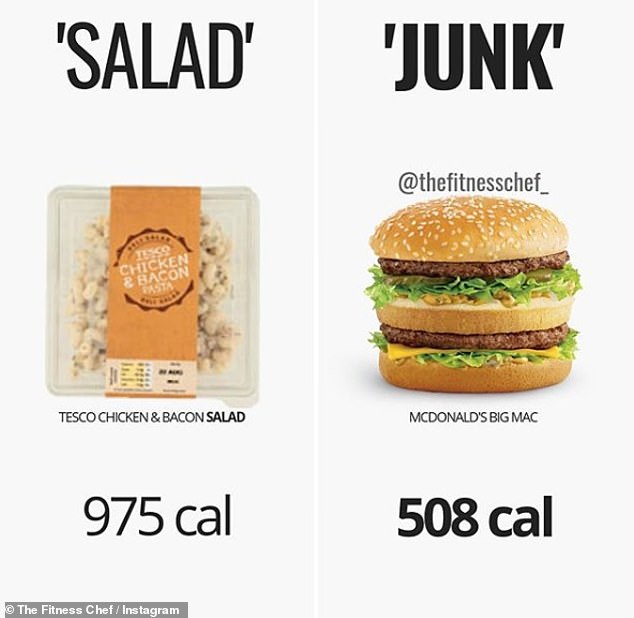 Why you SHOULDN’T rely on counting calories if you want to lose weight, according to a nutritionist

Speaking exclusively to Femail, award-winning nutritionist Kate Llewellyn-Waters previously warned of being cautious of just counting calories, and it’s important to making sure dieters are getting sufficient nutrients when trying to loose weight.

She said: ‘There are an increasing number of studies, which have shown that if our microbiome (our gut bacteria and their associated genes, which is now known as the “second brain”), has a low bacteria count and certain species are not in abundance, this can make us hungrier and then we take in more calories from the foods we are eating.

‘So, even if processed foods such as soft drinks, processed meats, “diet” food products contain the same amount of calories as a whole-food (such as an apple, or a free-range egg), they can actually cause us to consume more calories compared with a whole-food.

‘Sugar, processed meat, soft drinks and alcohol all change the balance of bacteria in our guts. And, we need positive gut-health for many reasons, including successful weight management.

‘Every person has a different make-up of gut bacteria, which is completely personalised and different from person to person. And, studies have shown that obese subjects have a lower number of different species in their guts compared with normal weight and non-obese individuals.

‘Also, a greater diversity of different bacteria species in our guts has been associated with achieving, and more importantly maintaining a healthy weight, and this is greatly influenced by what we eat. So the foods we eat as you can see are very important to long-term successful weight management.’

What’s the Best Diet for Health and Weight Loss? A Vegan Diet

DIY immunity concoctions may have adverse effects on your health