We all know that when it comes to weight loss, dropping the pounds is the easy part. It’s keeping weight off that’s hard. In fact a 2001 meta-analysis of 29 long-term weight loss studies concluded that most dieters regain more than half the weight they’ve lost within two years and pile 80 percent of it back on after five years.

There are all sorts of reasons staying slimmed down is tough, but in the final analysis they all boil down to one thing — to keep the weight off you have to consistently eat fewer calories than you did prior to losing weight. It’s been estimated that to maintain lost body weight over two years the average person needs to chow down on 170 fewer calories per day than before.

This is because when you lose weight, there’s less “metabolizable you” meaning your resting energy expenditure drops. But the effect is often magnified by metabolic adaptation—essentially your body becomes more energy efficient—which magnifies the drop in metabolic rate.

So “reverse-dieting”, which claims you can train your body to maintain a new lower body weight at a higher calorie intake, is raising a few eyebrows in the nutrition world.

Social media is awash with before and after lean body pictures, with captions alleging you can increase your food intake by 200, 300 or even 500 calories a day while still maintaining a svelte frame, or even continuing to lose some pounds.

While this would be fantastic there’s very little science to go on. But it’s an area that researchers are beginning to take a look at, and it may not be as crazy as it sounds.

Also referred to as the “diet after the diet,” reverse dieting has its roots in aesthetic sports where bodybuilders severely restrict calories to look “ripped” for a competition, then slowly increase food intake again in an attempt to go back to eating more calories without a disproportionate gain of fat mass.

But the practice is gaining traction among average eaters too, with reverse dieters increasing daily energy intake in a very controlled way—usually 30–100 calories a week—after the completion of a weight loss program. The aim, over several weeks, is to reach a higher level of food and calorie intake that (hopefully) becomes the person’s new normal for weight maintenance. 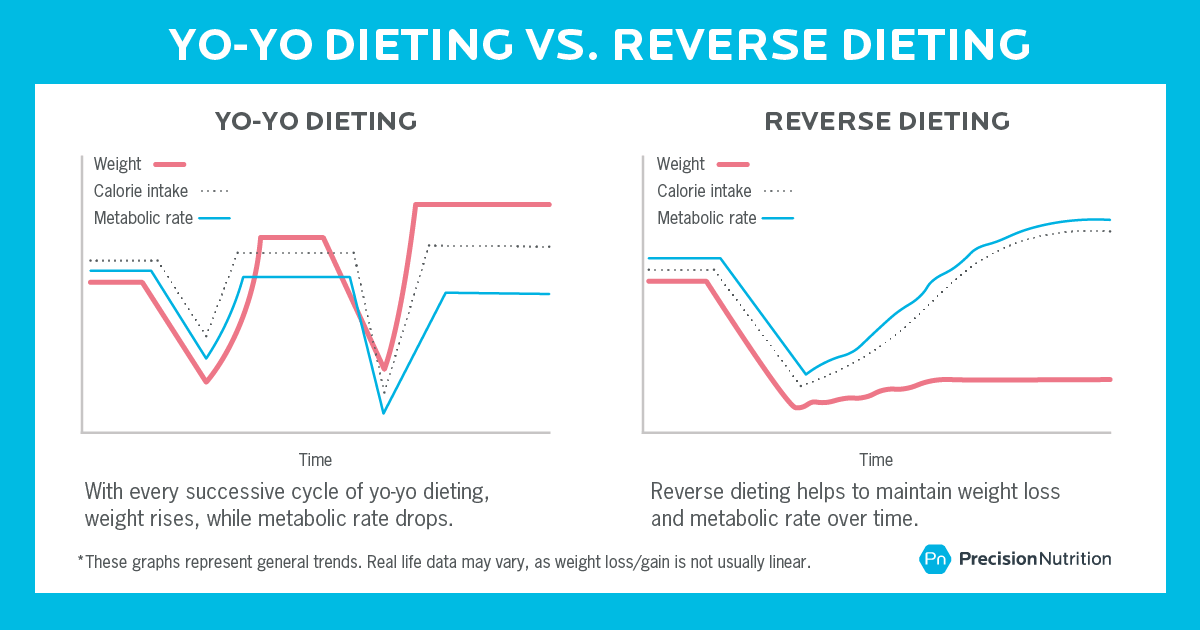 Advocates assert that this can reignite a metabolism made sluggish by months or years of calorie restriction and yo-yo dieting, while restoring hormone balance in favor of better appetite regulation.

Among the more overblown claims are some nuggets of truth.

“There is something to [reverse dieting] if it is done in a smart way,” says Lilian de Jonge, PhD, assistant professor at the Department of Nutrition and Food Studies, George Mason University, Virginia, and collaborator on the weight loss trials POUNDS LOST and CALERIE. “It’s well known that weight loss decreases metabolic rate beyond what can be explained by the loss of lean mass. There is some evidence that if you trick your body into eating more, metabolic rate can go up and this is especially true if this is done by increasing protein intake.”

Dr de Jonge is planning to run a trial on reverse dieting, but for now it is on hold due to COVID-19. However her previous pilot study showed that reintroducing calories slowly over eight weeks prevented weight overshoot and preserved lean body mass in weight training athletes who had lost weight for competition.

A randomized controlled trial study into reverse dieting is already underway at the University of Colorado, with a scheduled study completion date of December 2020. This study has recruited normal subjects (not athletes), which is a crucial and interesting difference. It could be expected that the results hinge quite heavily on how well the participants adhere to the exercise portion of the intervention.

A downside of reverse dieting is the need to track calories so closely, which at best is a faff and at worst could trigger obsessional eating. You can certainly see this played out on Instagram where reverse dieting often barely disguises a dysfunctional relationship with food and fitness.

That said if you’re a numbers nerd, reverse dieting might prove to be a weight maintenance approach that works well for you.

And when you strip away the hype, the tenet behind  reverse dieting—that after you’ve successfully lost some weight, you absolutely need a plan to keep it off–-is solid.

What we already know about who successfully keeps weight off comes from the U.S. National Weight Control Registry, a database of over 10,000 people who have shed at least 30 pounds and kept it off for at least a year.

This database shows that while there is no one way to slim or keep weight off, there are some common characteristics across successful weight maintainers. These include eating breakfast (78 percent of participants), stepping on the scale at least once a week (75 percent), watching TV less than 10 hours a week (62 percent) and exercising on average one hour per day (90 percent)

Of course managing to avoid weight gain in the first place is the ideal, as you’ll never then need the diet after the diet. But if that ship has sailed it’s good to know that putting weight back on doesn’t have to be inevitable.

Reverse dieting might prove a way to make it easier.

Angela Dowden is a British award-winning health journalist and Registered Nutritionist with over twenty years of experience writing for consumer sites and publications that have a global reach. These days she hangs out quite a bit in LA, where she likes to sniff out nutri-nonsense and write about it. Find Angela on Twitter @DietWrite